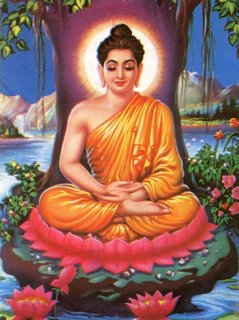 Who is a Buddha? A Buddha is one who has attained bodhi. By bodhi is meant an ideal state of intellectual and ethical perfection which can be attained by man by purely human means. In order to make clear how the Buddha attained bodhi, let me narrate a brief summary of the Buddhas life.

About 623 years before the Christian era, there was born in Lumbini Park in the neighbourhood of Kapilavatthu, now known as Padaria in the district of modern Nepal. an Indian Sakyan prince, Siddattha Gotama by name. To mark the spot as the birthplace of the greatest teacher of mankind, and as a token of his reverence for him, the Emperor Asoka in 239 B.C.. erected a pillar bearing the inscription. 'Here was the Enlightened One born'.

Gotama's father was Suddhodana, king of Kapilavatthu, the chief town of the Sakyan clan; and his mother, who died seven days after his birth, was Queen Maya who also belonged to the same clan. Under the care of his maternal aunt, Pajapati Gotami. Siddhattha spent his early years in ease, luxury and culture. At the age of sixteen he was married to his cousin, Yasodhara, the daughter of Suppabuddha, the king of Devadaha, and they had a son named Rahula.

For nearly thirteen years Siddhattha led the life of a luxurious Indian prince, seeing only the beautiful and the pleasant. In his twenty-ninth year, however, the truth gradually dawned upon him, and he realized that all without exception were subject to birth, decay and death and that all worldly pleasures were only a prelude to pain. Comprehending thus the universality of sorrow, he had a strong desire to find the origin of it, and a panacea for this universal sickness of humanity. Accordingly he renounced the world and donned the simple garb of an ascetic. 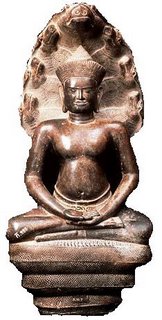 Wandering as a seeker after peace he placed himself under the spiritual guidance of two renowned brahman teachers, Alara and Uddaka. The former was head of a large number of followers at Vesali and was an adherent of Kapila, the reputed founder of the Sassata system of philosophy, who laid great stress on the belief in atma, the ego. He regarded the disbelief in the existence of a soul as not tending towards religion. Without the belief in an eternal immaterial soul he could not see any way of salvation. Like the wild bird when liberated from its trap, the soul when freed from its material limitations would attain perfect release; when the ego discerned its immaterial nature it would attain true deliverance. This teaching did not satisfy the Bodhisatta, and he quitted Alara and placed himself under the tuition of Uddaka.

The latter also expatiated on the question of 'I'', but laid greater stress on the effects of kamma and the transmigration of the soul. The Bodhisatta saw the truth in the doctrine of kamma, but he could not believe in the existence of a soul or its transmigration; he therefore quitted Uddaka also and went to the priests officiating in temples to see if he could learn from them the way of escape from suffering and sorrow. However, the unnecessarily cruel sacrifices performed on the altars of the gods were revolting to his gentle nature, and Gotama preached to the priests the futility of atoning for evil deeds by the destruction of life, and the impossibility of practising religion by the neglect of the moral life.

Wandering from Vesali in search of a better system, Siddattha went to many a distinguished teacher of his day, but nobody was competent to give him what he earnestly sought. All the so-called philosophers were groping in the dark, it was a matter of the blind leading the blind, for they were all enmeshed in ignorance. At last Siddattha came to a settlement of five pupils of Uddaka, headed by Kondanna, in the jungle of Uruvela near Gaya in Magadha. There he saw these five keeping their senses in check, subduing their passions and practising austere penance. He admired their zeal and earnestness, and to give a trial to the means used by them he applied himself to mortification, for it was the belief in those days that no salvation could be gained unless one led a life of strict asceticism, so he subjected himself to all forms of practicable austerities. Adding vigil to vigil, and penance to penance, he made a super-human effort for six long years until eventually his body became shrunken like a withered branch. His blood dried up, the skin shrivelled and the veins protruded, but the more he tortured his body the farther his goal receded from him. His strenuous and unsuccessful endeavours taught him one important lesson, though, and that was the utter futility of self-mortification.

Having this valuable experience he finally decided to follow an independent course avoiding the two extremes of self-indulgence and self-mortification, for the former tends to retard one's spiritual progress and the latter to weaken one's intellect. The new path was the Majjhima Patipada, the Middle Path, which subsequently became one of the salient characteristics of his teaching. 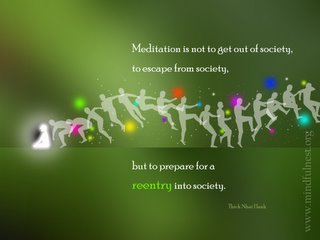 Early in the morning on the full moon day of Vesakha, as he was seated in deep meditation under the Bodhi Tree, unaided and unguided by any supernatural agency but solely relying on his own efforts, the consciousness of true insight possessed him. He saw the mistaken ways that all the various faiths maintained, he discerned the sources whence earthly suffering came and the way that leads to its annihilation. He saw that the cause of suffering lay in a selfish cleaving to life, and that the way of escape from suffering lay in treading the Eightfold Path. With discernment of these grand truths and their realization in life, the Bodhisatta eradicated all passions and attained enlightenment - he thus became a Buddha.

Having attained Buddhahood, the supreme state of perfection, he devoted the remainder of his precious life to serving humanity, both by example and precept, without any personal motive whatsoever. In order to deliver his first sermon the Buddha started for Benares, which has been famous for centuries as the centre of religious life and thought. On his way he met one of his former acquaintances. Upaka, a Jain monk, who, being struck by his majestic and joyful appearance, asked, 'Who is the teacher under whose guidance you have renounced the world?' The Buddha replied, 'I have no master, I am the Perfect One, the Buddha. I have attained peace. I have attained Nibbana. To found the Kingdom of Righteousness I am going to Benares: there I shall light the lamp of life for the benefit of those who are enshrouded in the darkness of sin and death.' Upaka then asked 'Do you profess to be the Jina, the conqueror of the world?' The Buddha replied, ' Jinas are those who have conquered self and the passions of self, and those alone are victors who control their passions and abstain from sin. I have conquered self and overcome all sin, therefore I am the Jina.'

At Benares he met Kondanna and his four companions in the Deer Park, now known as Saranath. When these five saw the Buddha coming towards them they addressed him as Gotama, his family name. Then the Buddha said to them, 'Call me not after my personal name, for it is a rude and careless way of addressing one who has become a Buddha. My mind is undisturbed whether people treat me with respect or disrespect, but it is not courteous for others to call one who looks equally with a kind heart upon all living beings, by his familiar name; Buddhas bring salvation to the world and so they ought to be treated with respect.' Then he preached them his first great sermon, the Dhammacakkapavattana Sutta, in which he explained the Four Noble Truths and the Noble Eightfold Path. They received ordination and formed the first nucleus of the holy brotherhood of disciples known as the Sangha.

During his active life the Buddha made many converts, high and low, rich and poor, educated and illiterate, brahmans and chandalas, ascetics and householders, robbers and cannibals, nobles and peasants, men and women from all classes and conditions became his countless disciples, both ordained and lay. After a supreme ministry of forty-five years the Buddha, in his last preaching tour, came to the town of Kusinara in the eastern part of Nepal, where he passed into Nibbana at the ripe age of eighty. His last words to his disciples were,'All conditioned things are subject to decay; strive with heedfulness'.

The Buddha was, therefore, a human being. As a man he was born, as a man he lived, and as a man his life came to an end. Though a human being he became an extra-ordinary man, acchariya manussa, as he himself says in the Anguttara Nikaya; he does not claim to be an incarnation of Vishnu, as the Hindus believe, nor does he call himself a saviour who saves others by his personal salvation. The Buddha exhorts his disciples to depend on themselves for their salvation, for both purity and defilement depend on oneself. In the Dhammapada he says, 'You yourselves should make the exertion, the Buddhas are only teachers. The thoughtful who enter the Way are freed from the bondage of sin. He who does not rouse himself when it is time to rise, who, though young and strong is full of sloth, whose will and thoughts are weak, that lazy and idle man will never find the way to enlightenment. Strenuousness is the path of immortality, sloth the path of death. Those who are strenuous do not die; those who are slothful are as if dead already.'

Buddhas point out the path, and it is left to us to follow that path to save ourselves. To depend on others for salvation is negative, but to depend on oneself is positive. In exhorting his disciples to be self-dependent the Buddha says in the Parinibbana Sutta, 'Be ye lamps unto yourselves; be ye refuges to yourselves; hold fast to the Dhamma as a lamp; hold fast to the Dhamma as a refuge; seek not for refuge in anyone except yourselves. Whosoever shall be a lamp unto themselves and a refuge unto themselves, it is they among the seekers after bodhi who shall reach the very topmost height.'

Furthermore, the Buddha does not claim the monopoly of Buddhahood which, factually, is not the special prerogative of any specially chosen person. He reached the highest possible state of perfection to which any person could aspire, and he revealed the only straight path that leads thereto. According to the teachings of the Buddha, anybody may aspire to that supreme state of perfection if he makes the necessary exertion; thus, instead of disheartening his followers and reserving that exalted state only for himself, the Buddha gave encouragement and inducement to follow his noble example.

hello
vodano
nice to see you
where are you stay now ?

Great to know you that, you are studying in Thailand. Now I am in a mission of North America.

Have a nice day

You have an awsome blog. Please keep updating!

Orkun chrern...sometime, just spend a littl bit of time to search some new ideology focusing the meaning of life and society, will be useful to ourselves and all others(readers)...

With the concept of Philanthropical Motivation!