Presently, Cambodia is in need of human resource development. Only education can liberate the Cambodian people from their bondage of suffering. 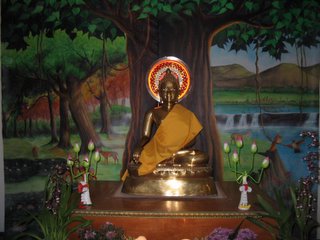 It is extremely urgent to articulate and solve this deficit. Cambodia now has a very high rate of illiteracy, which is the legacy of our chaotic past. Many scholars, teachers and educated people were murdered. The Khmer Rouge was intentionally targeting and killing this stratum of society in order to destroy all learned people. It was noted that at the beginning of the 1970s, more than 20,000 teachers lived in Cambodia; only about 5,000 of the teachers remained 10 years later. Also a Soviet source reported that “90 percent of all teachers were killed under the Khmer Rouge regime”. Other researchers have said that the many years of Vietnamese occupation in Cambodia, had used the educational system as the principal mechanism for the promotion of a dominant ideology. It also described the Vietnamese process of political education of Cambodians as the attempt to ‘change the brain’ of Cambodians. There is a critical, immediate concern, that the Cambodian educational structure was either destroyed by the Khmer Rouge or manipulated by foreign interests to serve their purposes rather than to serve the Cambodian people.Traditionally, Cambodian education, in the past, was handled by the local Wat, and Buddhist Monks were the teachers. The students were almost entirely young boys, and they learned the monastic disciplines and memorized the Pali texts. Basically, Wats or monasteries were the front line of education and offered many different subjects to students. Some source said “the curriculum of Buddhist schools consisted of the study of Pali, of Buddhist doctrine, science, hygiene, civics, and agriculture”.

After the French colony had come to control Cambodia, the French education model was inaugurated alongside the traditional system, but they neglected to develop an effective educational leadership and initiate a program of long term human resource development. Only seven high schools were created and these managed intentionally to produce only French language interpreters. When Cambodia achieved freedom from the French in 1954, the educational system had been modestly developed through the leadership of many Buddhist monks and other lay-scholars who graduated from French designed system. Somdech Choun Nath and Somdech Hout Tart were recognized as gifted Buddhist scholars in that period. The Buddhist school system was not replaced by secular state schools until the late 1950s and 1960s.

The existence of Buddhist perspectives in educational leadership is well supported by Buddha’s teachings. 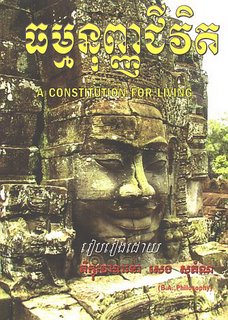 When Buddha taught the people, he always encouraged them to be critical and arrival at conclusions that they knew to be true, not just based on what they heard. In the Kalama Sutta, he told Kalama people not to have belief or make decisions unless they know by themselves that what they heard were wholesome and good, then accept them and follow them. He also told the Bhikkhus (monks) that a disciple should examine even the Tathagata (Buddha) himself, so that he (the disciple) might be fully convinced of the true value of the teacher whom he followed. This clearly convinces us that a student-centered teaching methodology is an important model for the present day Cambodian educational structure. Through the Buddha’s biography, we can learn good examples of effective, pedagogical teachings such as teaching by the use of two clear expositions: an exposition in terms of people and an exposition in terms of ideas, or an exposition in terms of conventional teaching and an exposition in terms of absolute teaching. Buddha also grouped the different intellectual quotients of human beings into four: the genius, the intellectual, the trainable and the un-trainable. His every teaching is full of compassion, good intentions to provide people with right understanding and right attitude which can achieve real peace, happiness and prosperity. His exposition and teaching approach functions well in the beginning, the middle and in the end.In addition, Sekha means ‘to learn, study or educate’. To become a Buddhist, one has to study the basic Sekha called Paccha Sekha or five precepts. The five precepts are the basic learning skills required to become a leader in education, especially to be able to offer people the example of the responsibilities of speech and action. To train the people by not allowing killing, stealing, committing sexual misconduct, telling lies and the addiction to alcohol or drugs. These precepts are replaced by accumulating compassion, living with righteousness, contentment with our own partner, to be honest and polite, and to be mindful.

Within the exploration of Cambodian Buddhist 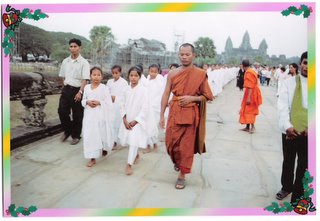 educational leadership, I have intended to connect the two main streams of secular school and Buddhist school in order to utilize and initiate effective and sustainable human resource development in Cambodia. Cambodian Buddhist education and secular state education is interdependent and inseparable. In many other developed countries, they have separated religion from the State. But in this case, the Buddhist principles of critical thinking and responsible ethics, and their integration within government have never created any conflict within the state. As well, through the evidence of 2549 years old of Buddhism, I can reaffirm this peaceful integration. I can assure and guarantee that to bridge Buddhist education with secular state education will only help to improve rather than contaminate education, especially in proving out that the integration of Buddhist ethics within Educational Leadership in Cambodia can empower my country with an ideology of compassion and peace.

To structure a strong education foundation requires a willingness to implement it, and a commitment to follow up with action on the subsequent results. Educational leadership will play an important role in achieving this reform movement. Most educational leaders interest the education sectors such as policy making, financial management or the public administration reform. United State Agency for International Development reports that “Cambodia’s education system faces many challenges including high pupil/teacher ratios, low enrolment, and few resources”. Other sources have said: Cambodian education depends on an old style model which culturally entrenched notions of hierarchy and power. When a Westernized model is introduced, the clashing of both systems will be unavoidable. To deal with this situation demands a strong commitment of educational leadership. Personally, I conceptualize that to prevail, the young seeds of this Cambodian generation can not eradicate their past valuable cultural identity, but we cannot deny the arrival of the globalization trend whereby education becomes the deciding factor in increasing individual and family income in Cambodia while competing on the world’s markets. 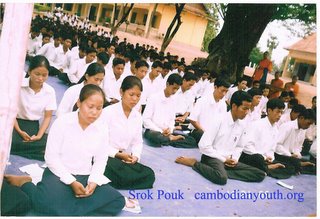 The first theme will be mainly focusing on the education development for reconciliation and peace. Second, strengthening and improving Buddhist education aims for monastic leadership in community-based development. Third, upholding Buddhist education to be equivalent or similar with secular education or other institutions and also to modernize it as has happened with other developed countries. This will be important to encourage the pedagogy Buddhology which encourages the full freedom of learners. Fourth, forming and supporting the understandable concept of having Buddhist education and secular education as an inseparable component in maintaining sustainable development in Cambodia. Fifth, adapting the applicable Buddhist curriculum for monk students and also strengthening social ethics through the use of Buddhist ethics in the secular schools. I may set up a steering committee called the “The Council of Buddhist and Secular Teaching” (CBST). Their initial function will be to initiate research, and publish the applicable Buddha’s teaching curriculum for the use of either monastic students or public students.