Beyond Angkor Wat: Sadness in Cambodia 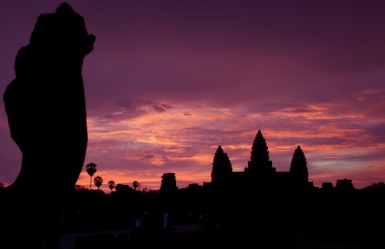 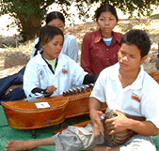 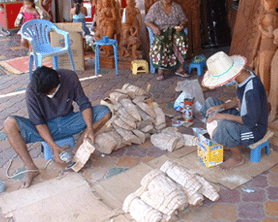 Wood carvers on streets of Siem Reap
Written by Elayne Clift
Thursday, 18 May 2006
Toward Freedom (www.towardfreedom.com)

Siem Reap, Cambodia - It’s the woman with the infant in her arms. I can’t take my eyes off her. More than the other pictures of frightened children, of men with missing ears, their eyes swollen shut, or the faces reflecting sheer terror or numb acceptance, it is her face that mesmerizes me. Maybe it’s that she doesn’t seem to know about the torture.

Perhaps she was still thinking they didn’t kill women, or their babies. But she died here, in this school turned prison, along with 14,000 other people during the Khmer Rouge nightmare in the time of The Killing Fields. When it was over in 1979, half of Cambodia’s population – three million people – were gone. Only seven prisoners were found alive in this hideous dungeon when it was liberated; one was an artist who, without bitterness, has captured on canvas what happened at S 21, the notorious Toul Sleng Prison.

On the streets of Phnom Penh it’s the multitudes of limbless that make me want to stare and look away at the same time. They are mostly men. They are legless, or have no arms, or are blind because of landmines. Children lead them as they beg. Everywhere you go there is begging. Naked little children beg. Women with babies hold out their palms and plead. "Yum, yum," they beseech, a hand on their mouth. Disfigured men and young boys try their best to flog postcards, shoe shines, sunglasses. What you don’t see are old men. They are gone now, gone to Choeung Ek and the other fields of slaughter.

There is also the other Phnom Penh – a city of riverside cafes frequented by tourists, family picnics on the quay as the stifling day draws to a close, hustling tuk-tuk drivers and aggressive vendors, a claustrophobic central market, smiling people who seem genuinely happy to welcome you to their poor country. There is commerce and tourism flourishes as foreigners come to see the Royal Palace and its Silver Pagoda, to light incense at Wat Phnom, or to watch the sunset from a longboat on the mighty Mekong River.

Siem Reap, the rapidly growing and anachronistic base camp town for Angkor Wat, again reveals the abject poverty of Cambodia. Barefoot children, some following older siblings, drift about. Women sell fruit and other goods at roadside stands and small markets. Men languish in hammocks, prostrate from the heat. Yet, amidst its dirt roads and street commerce a bizarre assortment of glitzy four and five star hotels proliferate along the main drag. It is strange and disturbing: Disneyland meets Las Vegas. While Cambodians struggle for subsistence survival, tourists feast on Bacchanalian buffets, shop in upscale craft outlets, and enjoy chauffeured air-conditioned cars.

Behind this eerie façade lies reality. Here is what our guide shared with us. He is self-taught, speaks three languages, and supports his twice-widowed mother on the $10 he earns daily - when he has "clients." His father, sister and brother died during the Khmer Rouge genocide. Corruption is rife in Vietnam-controlled Cambodia. No one cares, he says. Everyone exploits everyone else. Health care is virtually non-existent if you can’t bribe someone to take care of you, and most kids are lucky to make it through eighth grade. Listening to him I feel ashamed and embarrassed by my affluence.

Less than a mile from the glitzy hotels there is a state-of-the-art children’s hospital founded by a Swiss physician, an iconoclast whom many believe violates agreed-upon international protocols for primary health care in impoverished countries. They think this because he uses western diagnostic tools like CT scans, an outrageous expenditure some say, in countries where people don’t even know enough to wash their hands. But this doctor, for all his possible eccentricities, maintains the extraordinary belief that even poor children deserve to live, and saving their fragile lives often requires the same technology that rich kids can access. He is a thorn in the side of the Ministry of Health and, he claims, esteemed organizations like UNICEF and the World Health Organization because he treats babies with non-contagious TB when the resources needed to do that could save a lot of kids with infectious disease. It’s not cost-effective, his critics argue. These kids deserve to live too, he tells the critics, experts who stay in the fancy hotels when they come to Siem Reap to advise or evaluate him. I’d like to have met the Swiss doctor.

Something is amiss in the awesome land of Angkor Wat, one of the manmade wonders of the world. These amazing and prolific Buddhist and Hindu temples, scattered over nearly 200 miles and dating back to the 12th century, are exquisite, mysterious, and revealing. It is a privilege and a pleasure to see them, for no amount of research or documentary footage can capture their grandeur.

But why, I wonder, given today’s technology and the advanced civilization we in the west take such pride in, can there not be other manmade wonders – an end to poverty, for example? An end to childhood mortality from preventable causes? An end to genocide?

Angkor Wat has much to teach us. So does Phnom Penh and Siem Reap. The Cambodian people, gentle and generous, deserve much more than gaping tourists snapping their pictures and bargaining for their souvenirs while they try, yet again, to live. May the awesome monuments of this struggling country never rise above the awful reality of its suffering. It has continued, unabated, for far too long now.

# # #
Elayne Clift, a writer from Saxtons River, Vt., USA, has been teaching and traveling in Southeast Asia for a year. Her book about the experience, AJARN: A Year of Teaching in Thailand, is forthcoming. Photos by Elayne Clift.
Posted by Leadership at 5/18/2006 03:05:00 PM